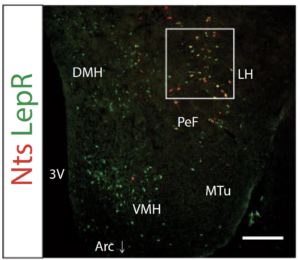 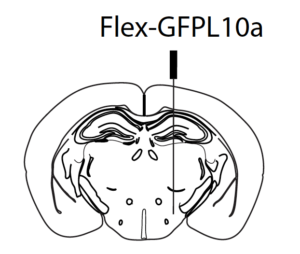 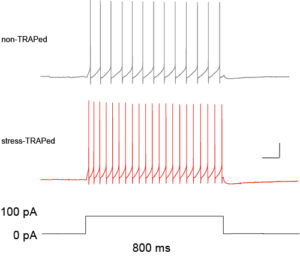 In this study published at Frontiers in Behavioral Neuroscience, Ioannis Koutlas and colleagues of the Meye lab, use the expression of immediate-early genes to characterize social-stress activated neuronal subsets in the ventral tegmental area. They show that cells of different molecular identities (dopaminergic, GABAergic, glutamatergic and combinatorial neurons) that are dispersed throughout the entire VTA are activated by a social stress episode. Furthermore, they validate the use of targeted recombination in active populations (TRAP2) to capture this VTA stress-activated neuronal ensemble and make it tractable for further manipulations. Finally, the use of TRAP2 allowed them to look into intrinsic electrophysiological properties of these neurons and show that stress activated VTA cells are more excitable than neighbouring cells that were not activated by stress.

“I am very excited that this work is published. It gives insight on stress-encoding VTA neuronal populations and provides us with the tools to answer further exciting questions” – Ioannis 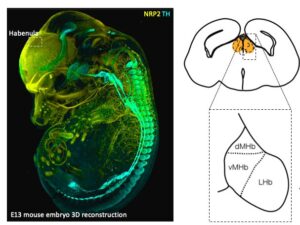 The habenula (Hb) plays a key role in processing reward information and mediating aversive responses to negative stimuli. In the recent issue of Cell Reports, Lieke van de Haar and colleagues have revealed how the cellular diversity of the mouse habenula is formed during development. In the work title “Cellular diversity of developing habenula may illuminate risk for human psychiatric disorders”, Lieke used single cell RNA sequencing, a technique that allows quantification of gene expression in thousands of cells simultaneously. 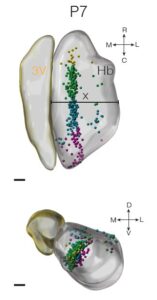 Reconstruction of lineage trajectories using computational tools revealed paths to habenula cell types. Intersectional genetics experiments by Oxana Garritsen showed that these include a physiologically distinct neuronal cell type that innervate the dorsal IPN which can be identified by Cartpt expression. Work by Lieke and Youri Adolfs using iDISCO and light sheet microscopy have shown that these cells localize to the medial habenula. The ePhys work by Danai Riga of the Meye lab found that these Cartpt+ neurons are electrophysiologically different from surrounding neurons. Finally, MAGMA analysis by Juliska Boer, who did her bachelor internship under the supervision of Lieke, revealed that developing cell populations align with human genetic risk loci of psychiatric disorders, such as the major depressive disorder.

“The habenula plays an important role in negative experiences, and is located dorsally to the thalamus and ventrally to the hippocampus…. we were interested in how the cells of the habenula are born and mature.” Lieke

Lieke performed her PhD work at the Pasterkamp lab of our Translational neuroscience department of the UMC Utrecht Brain Center. This work is a fine example of internal collaborations in the department which connect molecular, computational, genetic and electrophysiological techniques.

Neural stem cells (NSCs) of the subventricular zone (SVZ) remain mostly in a dormant state in the adult human brain after closure of the neurogenic period at birth. These dormant progenitors rarely proliferate or produce neurons. How an adult human NSC is maintained in this quiescent state and could be triggered to re-activate is still unclear.

In this recent publication at Nature Communications, Vanessa Donega, Elly Hol and colleagues unravel a possible mechanism through which progenitors of the adult human SVZ are maintained in a dormant state. They used state-of-the-art single-cell RNA sequencing to profile the molecular characteristics of a major neural stem cell niche in the adult human brain. They identify the Wnt pathway antagonist SFRP1 as a possible signal that promotes neural stem cell quiescence in the aged human SVZ. Furthermore, they show that inhibition of SFRP1 stimulates neural stem cell activation both in vivo and in vitro. This work opens up future possibilities to stimulate neural stem cells of the human brain to promote repair.

“I am very happy that this work is out, and I am excited to continue investigating the role of SFRP1 in regulating neural stem cell quiescence.” Vanessa Donega

This work was performed primarily at our Translational Neuroscience department of the UMC Brain center. This work was supported by ZonMw, by the MAXOMOD consortium, a Ministry of Science and Technology of China grant, Theme-based Research Scheme, Health and Medical Research Fund and CUHK Direct Grant 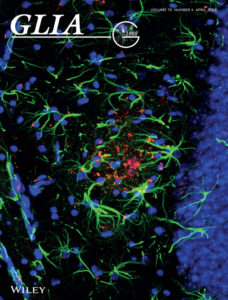 Astrocytes are literally the star cells of our brains! PhD candidate Christiaan Huffels, from the group of Elly Hol, recently published a study on astrocyte function in early-stage Alzheimer’s disease in the scientific journal GLIA.

Alzheimer’s Disease is the main form of dementia in the elderly, characterised by the accumulation of amyloid-ß protein. In this study, Huffels and his colleagues examined the role of astrocyte function in Alzheimer’s Disease. They focused on Kir4.1 expression and function, which is an ion channel that is essential for the role of astrocytes in the maintenance of tissue ion homeostasis. Despite localised increase in Kir4.1 protein expression, astrocyte Kir4.1 channel dysfunction is likely not involved in the pathogenesis of early-stage Alzheimer’s disease. This study hereby provides more in-depth insight into the development of early-stage Alzheimer’s disease and provides directions for future research. After this study was accepted for publication, one of the images was selected for the cover of GLIA.

Christiaan was happily surprised: “I thought it was great that they asked me to provide an image for the cover and immediately agreed, as this can draw extra attention to the interesting study we performed.”